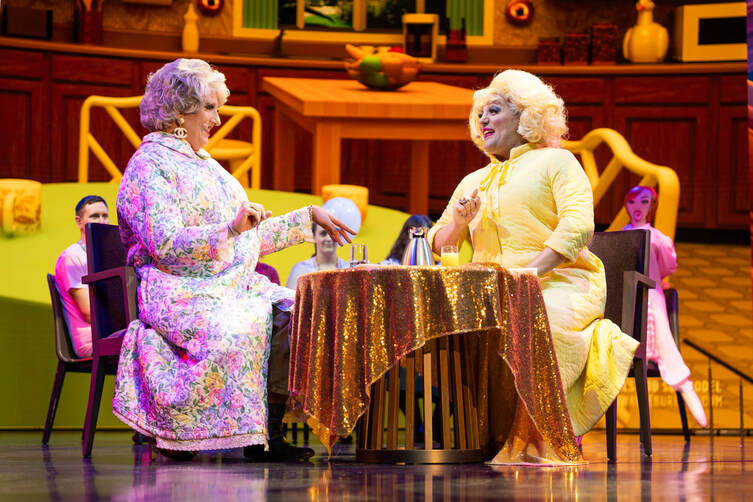 Traveled down the road and back again...

The hilarious camp troupe, the Golden Gays™ NYC, burst onto the scene in the Summer of 2017. They first appeared at RuPaul's DragCon NYC 2017 and then at the famed Rue-La-Rue Cafe in Washington Heights, New York. Since then, they have performed sold-out engagements off-Broadway at Theatre Row, The Laurie Beechman Theatre, and The Duplex. Additionally, they have performed regionally at The Asbury Hotel, The Music Box Supper Club, and The Pilgrim House. The Golden Gays have garnered a loyal and loving fan base (#FriendOfClayton).

They set their sights beyond Broadway and took their Golden Girls Musical Revue “Hot Flashbacks” on a mini-tour to Pittsburgh, PA, Cumberland, MD, Baltimore, MD, and Asbury Park, NJ. They became the toast of the Northeast in Spring 2018.

At RuPaul’s DragCon in 2018 (their 2nd appearance), GGNYC partnered with Golden Girls merchandise aficionado Sassy Green Lady, spreading the Golden Girls love and dressing up gaggles of #TokenSophias along the way. They even sang live on the main stage with an introduction by Mrs. Kasha Davis!

​“It’s like a gay barbershop, Pitch Perfect, and the Hallmark Channel got together to put on a show!”
​
In December 2018, GGNYC hit the road again with a brand new holiday musical “Thank Yule for Being a Friend,” returning to their newfound homes away from home in Pittsburgh, Cumberland, Baltimore, and Asbury Park. They also picked up New Hope, PA along the way!

In 2019, GGNYC played Rochester, NY. They premiered their musical game show The Golden Games during the summer of 2019 with Mrs. Kasha Davis and Aggy Dune. Additionally, they performed on the maiden voyage of VACAYA's Provincetown Cruise. Then, they did a Midwest tour of their show “Hot Flashbacks” in Cleveland, Detroit, Chicago, Indianapolis, and Pittsburgh. Tickets sold out fast!

“Thank Yule for Being a Friend” premiered in Provincetown, MA before playing Asbury Park, Cleveland, Pittsburgh, Cumberland, Baltimore, Philadelphia, and NYC, followed by a two-week run in Fort Lauderdale. The holiday tour concluded at the Hackensack Performing Arts Center in Hackensack, NJ.

2020 featured the Dallas premiere at the Virgin Hotel, both of the Golden Fans at Sea cruises, the virtual debut of “Hot Flashbacks” on StageIT, weekly live shows on Facebook, the virtual "tour" of “Thank Yule for Being a Friend” on Stellar Tickets, and the premiere of their Ruth Wallis-inspired cabaret, “Queer Things”.

2021 was the year GG™ returned to the stage! Mostly! Sort of! Jason's one woman Bea Arthur show Beatrice Arthur: Astral Dame premiered in South Florida at Empire Stage and Gerry was the special guest star. The Golden Gays played every Pride celebration they could. They played Bridgeport CT, Peabody MA and Rehoboth Beach DE for the first time! They embarked on the longest and most intricate tour of Thank YULE for Being a Friend to date including a two week sit-down in Wilton Manors, FL at Island City Stage.

2022 is the third Golden Fans at Sea cruise, the premieres of "Legendary Divas, Betty & Bea Against Humanity" and "Ring Ring, it's the Libertine Belle - Murder Musical!" The GG™ are touring with their hit game show, "The Golden Games" which will showcase the talents of the new cast member Christopher Eklund as the Blanche! They will also attend the first ever Golden Con in Chicago with their pals Flip Phone Events, Celebrity Cruises and Dream Vacations. In addition to all of their usual tour spots, The GG™ are researching many new venues and will set out on their most ambitious Thank YULE tour this holiday season adding: Madison - NJ, Camp Hill - PA, Scranton - PA, Syracuse - NY, Worcester - MA!

New Years Eve 2022 will be in Atlanta at the queer venue Metropolitan Studios!

In early 2023, The Golden Gays™ will take their hit Off-Broadway musical Hot Flashbacks to Chattanooga - TN, Jacksonville - FL, Asheville - NC, Las Vegas - NV and then return to the Golden Fans at Sea cruise in April.

Stay tuned for the biggest Spring/Summer tour of "Hot Flashbacks" to kick off in May 2023 including a "Sunshine Cadets in the Woods" - Golden Girls Exclusive Weekend TBA!!

What's next?
Broadway? Space? Broadway in Space? Here they come! 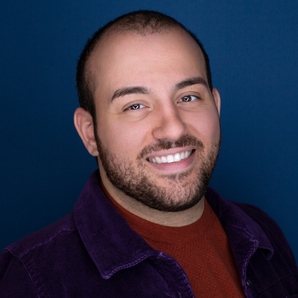 Gerry Mastrolia, Marketing/the Rose, hails from North Jersey, where he began entertaining at the age of 3 with Three Stooges routines in his living room. At age 9, Gerry was introduced to the merry world of musical theatre, where some of his favorite roles include Edna (Hairspray), Horton (Seussical), Lord Farquaad (Shrek), and Jeff (Title Of Show). He began professionally working in New York at 18 and was seen on CBS & E! News for his work in the off-Broadway show Totally Tubular Time Machine starring Debbie Gibson. Shortly after, he created and starred in his debut solo cabaret show, Very Gerry, which played famous cabaret clubs like Don’t Tell Mama, the Metropolitan Room, and Paul Colby’s The Bitter End. Since then, Gerry has hosted, starred in, and created many cabaret performances in New York and all over the tri-state area. He’s toured with Tony n’ Tina’s Wedding and is currently working on his solo Impersonation show Legendary Divas, Kiss My Sass, paying homage to the divas of Old Hollywood. Endless love and gratitude to his family, friends and mentors for their love and support. "If I can make people smile, then I've served my purpose for God". -Red Skelton. www.GerryMastrolia.com 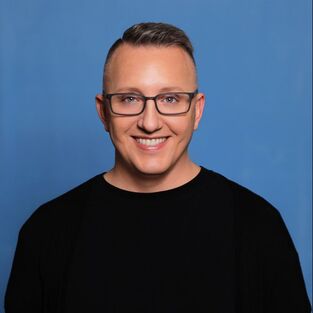 Jason Bea Schmidt, Producer/The Dorothy. Jason is the world's premier Bea Arthur impersonator. He lives in Philadelphia with his husband, poodle and shih tzu. He’s an actor, voice-over talent, and founding member of the hilarious drag troupe the Golden Gays™! His Golden Girls journey began with “Thank You for Being a Friend: The Musical” spurning his one “woman” show “Beatrice Arthur: Astral Dame”, and then spurning the Golden Gays™. What’s next? Golden Girls: Infinity Wars?! He has worked alongside drag legends Joey Arias, Sherry Vine, Flotilla DeBarge, and Lady Bunny in his extensive off-Broadway, Cabaret, and Comedy Club credits. Gloria Swanson, Frank N Furter, a German Transvestite Assassin named Friedrich, you get the idea... www.JasonBSchmidt.com 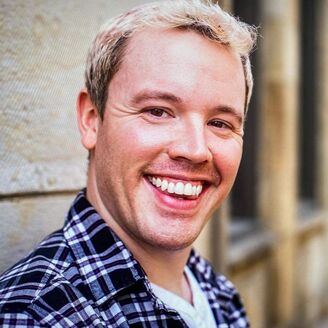 Christopher Eklund, Cast Member/Blanche, is absolutely tickled blush and bashful to be joining The Golden Gays as The Blanche. He has been enraptured with these fabulous women since a very young age and had seen every single episode of The Golden Girls long before puberty. Previous theatrical credits include The Little Mermaid (Ensemble U/S), Guys & Dolls (Nathan Detroit), Chess (Freddie Trumper) and The Producers (Carmen Ghia) opposite RuPaul’s Drag Race season 7 queen, Mrs. Kasha Davis. Follow him at @christophereklund88 on Instagram and @christyler1288 on Twitter. 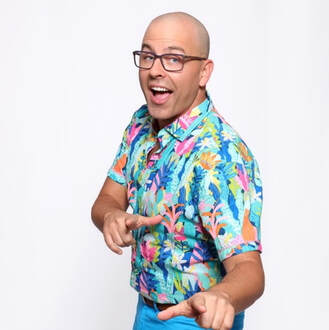 Anthony Giorgio, the Director/ Choreographer/ Production-Manager. Anthony has been inspiring minds for years. A professional dancer since he was 16, endless performance opportunities have allowed him to connect with the world through projects like Broadway to Bombay in NYC and India and the World Wide Kindness Day flash mob danced in over 25 countries by over 10,000 people. He is a Teaching Artist, choreographing in theatres and classrooms and working in theatre camps with kids from 2-18. His podcast, “Queer Teen Podcast,” encourages young people to tell their truth. Much love and courage to husband Jason Bea, Penny the Poodle, and Dexter the Shih Tzu (@PenandDex on Instagram) 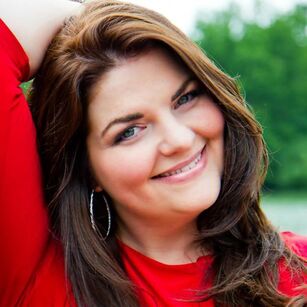 Darlene Rae Heller, the Creative Consultant. Darlene has graced NYC stages, voice-over studios, and gay bars as an actress, singer, and comedian. She now focuses her talents on creative consulting for comedic and variety shows and monologue coaching for beginning and experienced talent. For over ten years, Darlene and Jason (the Dorothy) were known in the comedy, cabaret, and theatre circuits of NYC as the hilarious musical song parody duo “The Parodivas”. They performed ridiculous parodies of Lady Gaga, Mariah Carey, Peter Frampton, and basically any song they could spin into comedy gold. Darlene has a BFA in Acting with a Creative Writing minor from Adelphi University. She lives in West Orange, NJ. Shout out to Bobby, Liv, and the deer that sleep in her backyard. Follow @ItsMeDarleneRae on the gram Greg Carey, The Cast Member. Greg is an Actor and Playwright based in New York City. He recently graduated from Adelphi University in 2020 with a BFA in theatre. Greg is thrilled to be joining the Golden Gays™ and truly titillated to get a chance to work with this great group of people!
Originally created by Andy Crosten, Gerry Mastrolia, Jason B. Schmidt and Mason Griffin in 2017, the Golden Gays NYC set out to create Golden Girls Musicals they would want to see on stage! The current company, now known as The Golden Gays™ continues to bring the original creators' dream to fruition.
www.TheGoldenGays.net www.TheGoldenGays.co http://TheGoldenGays.co